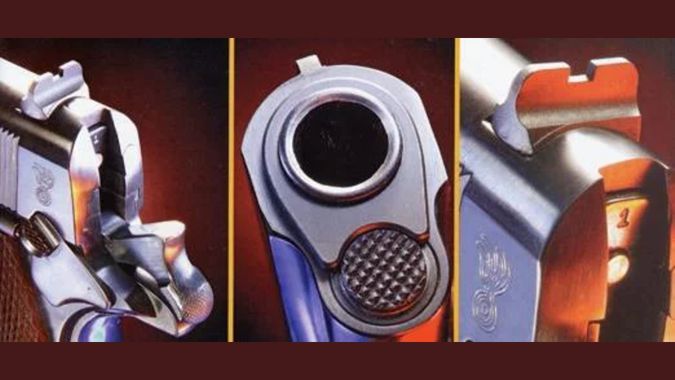 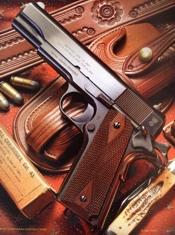 “You’re not actually going to shoot that, are you?” “Oh sure,” I answered, locking the slide open and applying a couple drops of oil as if to further prove my intentions. “But is looks mint,” he continued, “unfired even!” His eyes, which looked as if they might produce tears at any moment, were locked on the brilliantly blued pistol.

“Yeah, I don’t know that it’s ever been fired,” I answered while sliding a magazine into place. “But, but, wouldn’t it be a shame to.” The report of the first round drowned out the rest of his sentence.

I had to feel pity for the guy. After all, I’d been taken too when Roy Huntington, American Handgunner’s stalwart editor had handed me the pistol some weeks past.

I had felt a slight tightening in my chest, a pounding in my ears, and I wiped a moist hand on my blue jeans before accepting what appeared to be a crisp, pristine GI-issue 1911 from the late teens. I was on the phone at the time and thus I pantomimed to Roy, asking permission to check the chamber. After all, you don’t cycle a collector’s gem like this without permission.

What I should have noticed was Roy’s slight smirk.

After a minute of looking over the “old” gun I had more questions than answers. Flipping it over really raised an eyebrow, as the frame bore the legend: “Caspian Arms Ltd. Wolcott, VT, USA.” What on earth did we have here?

Roy soon filled me in. This is from the shop of Tussey Custom, built on a special 1911 pattern frame and slide from Caspian Arms, and it’s truly an interesting custom pistol. To start with, it’s a breath of fresh air to see a custom .45 without all the “improvements” that seem to be required today. No mag funnel, no beavertail, no ambi-safety in other words a .45 made the way the good Lord and John Browning intended.

Sure, a real collector would point out small details that weren’t right for an early 1911: Long rather than short tang grip safety, a series-80 firing pin stop, sights not quite correct, deviations from original markings and a larger ejection port, etc. But put it in your mitts, sight along that polished slide and you can almost feel the sticky mud of the Meuse-Argonne under your boots or see the dark woods of the Ardenne forest.

If it were just a replica, that would be one thing, but there’s more here than can be seen at first glance.

Checking Under The Hood

Cycle the slide briskly then press your thumb down on the barrel hood to check for lost motion. Nope, it’s as immovable as the pyramids. The slide to frame fit is impeccable as well. There’s no slop, no shake, and the slide travels along the frame ways slick as greased ball bearings.

Field stripping (thank goodness there’s no full-length guide rod to complicate matters), gives us a better look at what work has been done and how well it’s been executed. The first thing noticed is how nicely the frame “deck” has been bright polished as part of the slide-to-frame fitting job. Likewise the barrel seat in the frame, the slide center-rail, the outside of the frame rails and the breech face. Even the ejector’s sides have been brightened.

This sort of hand polishing is not only an elegant, old world touch, it gives the finished gun that smooth, slick feeling when the slide is cycled. In some areas, such as the breech face, taking the time to bring all surfaces dead flat an true as well as eliminating sharp edges where required pays dividends in reliable feeding as well.

Frame and barrel feed ramps have been properly shaped and polished to a mirror finish The barrel bushing shows the right fit tight enough to aid accuracy, but not so tight a bushing wrench is required for stripping. Behind the bushing seat, the barrel has been turned down almost imperceptibly, just enough to clear the bushing’s inside diameter, improving smoothness and avoiding marking up the barrel’s blued finish.

The trigger action is superb, breaking at just over four pounds and crisp as a winter morning. Getting a safe, reliable trigger pull like this while keeping the heavy steel trigger is a tricky balancing act. Also noticeable was a absence of excessive over travel.

The stocks are diamond-checkered walnut from Cylinder and Slide. They’re handsome, hand-filling and look correct on the gun. The lanyard loop mainspring housing is by Smith and Alexander. We’re lucky to have them offering these, as the surplus parts are becoming scarce as hen’s teeth. Many of my working .45s wear lanyard loops. They can be mighty handy at times.

The sights deserve special mention. While in shape they look like GI sights, they’re not. The front measures .104 inch in width, nicely matching the .125-inch wide rear notch. These are huge compared to the “fingernail sights” of the early 1911s and much larger even than the improved sights fitted to the 1911-A1.

A front sight this large and heavy would soon fly off the slide if only staked in place. Instead, Tussey silver soldered this front sight to make it permanent, and he did a splendid job, with nary a trace of a solder line on the exterior. These sights give a fine, modern sight picture while looking period correct, and really, this sums up the entire package.

To all but the most careful observer Tussey’s retro custom looks on the outside like a gorgeous, but plain vanilla early Colt. On the inside it’s another story, with every pistolsmith’s trick learned over the last nine decades about how to make these guns function correctly and shoot superbly. Kind of a “wolf in sheep’s clothing” you might say, and that’s what makes it so interesting.

“Oh yes, it’s a really accurate “sleeper,” remarked Tussey when asked about this pistol. “That’s a Kart barrel, and I guarantee you, it’ll hook up the holes at 25 yards. My goal is an inch at 25 yards, and it’ll do it.”

When asked what sparked this project, Tussey admitted it was the result of decades spent studying these guns. “I’ve had a number of these nice early guns, but I once bought a true museum-quality 1911. It had been purchased by a Captain in 1918 and I had his original receipt and I always liked that beautiful, mint gun,” he continued. “There was just something elegant about it. If you have to explain the difference between one of these and a modern gun, well, I guess you just can’t.”

At any rate, I talked with Gary Smith at Caspian. He had a cool old 1911 and understood the attraction. Since he’s milling bar stock frames, we knew we could omit the relief cuts behind the trigger guard and make a few other changes. We worked out some ideas and soon enough, he sent me a few examples. I quilt them up and spent a great deal of time getting the correct old-time brushed finish. Tussey broke into a laugh, “It’s a pain, but I love doing that kind of work.”

I put a couple of these out at one of the last gun shows and it was fun to observe the reactions. At first, Tussey noted, “everyone thinks they’re an old original gun, but then you point out the slide to frame fit, the match barrel,well heck, on the inside they’re built just like all my best guns. When they see that, then their eyes really light up!”

Terry Tussey has been working on firearms professionally since about 1960, but he started long before that, remarking “even as a boy I had a lathe.” He began to specialize in pistol work by the mid-60s, doing jobs as diverse as custom fast-draw single actions and police duty revolvers, but the Government .45 always held a special attraction.

Tussey is a very well known figure in the southern California area where his shop was located for years prior to moving operations to Carson City, Nev. I’ve been admiring his work for about two decades, and you can’t help but notice two things. His finish work is truly flawless, and he’s a real out-of-the-box thinker, often coming up with unique ideas. Talk to him, and you can’t help but detect the enthusiasm.

“We could do a lot of interesting variations of this theme,” Tussey noted. “We can use your service number as a custom serial number, we have correct Army, Navy and even Marine Corps markings available. If you wish, the gun could be done up in polished hard chrome to look like old nickel but with better durability.”

Gary Smith, Caspian’s marketing director explained there has been far more interest in these vintage pattern frames and slides than anticipated. “We really thought it would just be a niche market,” he notes, “but these have been getting a lot of attention.” 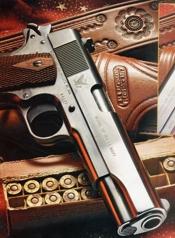 Over the last 20 years we’ve seen the Government .45 emerging into something akin to an atomic ray gun. But by contrast, there are a lot of shooters whom you might say are coming of age and who have a renewed appreciation for the classic lines of the early guns. What we’ve been able to do,” Smith explains, “is to offer the handsome style of the original 1911 along with today’s superior metallurgy. It’s really the best of both worlds.” Interestingly, Smith advises these frames may also be ordered in stainless or Titanium.

On the range, the pistol was a pure delight. The accuracy of Tussey’s hand-built guns is a know factor (“They’re like laser beams,” boasts Roy Huntington, who owns two), so we didn’t work too hard on proving it again, but instead just relaxed and had fun. Point of impact was dead on the sights at 25 yards. That’s one of the little touches you may not think about on a custom creation like this, but the sights had obviously been regulated with care.

Cast semi-wadcutters (200-grain H&G No. 68, 5.9 grains WW231) were the main item on the menu, with just enough Federal Hydra-Shok and Winchester ball mixed in to prove the pistol wasn’t the least bit finicky in its tastes.

It’s fair to note we did have a few malfunctions with the wadcutters when using the replica lanyard loop magazine. Switching to some proven Wilson Magazines eliminated all hiccups, and you could even feel the pistol feed more smoothly.

Finding something to criticize about this masterpiece was a pretty tall order. One observation is that the link pin was not staked in place. It may be a minor touch, but a loose link pin can drive you nuts when attempting to reassemble the pistol. Staking it into place takes only a moment and will also prevent inadvertent loss of the link and pin while the barrel is dismounted from the gun.

We would also prefer a little gentle shaping and polishing of the camming surface of the magazine catch to ease the force required to insert the magazine. Yes it’s a really minor gripe, but that’s all we can find. There’s just not much of anything here that isn’t well perfect.

So what would such a pistol cost? “About $2495,” advises Tussey. Wait time varies depending upon the amount of work on hand, but expect six months or longer. He’s a prolific and popular smith, and his shop is always busy.

With a couple of magazines worth of cartridges left, I tapped my fellow shooter on the shoulder and brought him over to try his hand with the lusty blue beauty. After showing off the pistol’s features it was his turn to cut a couple tight clusters, which he did.

After the last piece of brass had rattled to the deck, he set the gun down and grinning, asked all the expected questions “who, where, how much” all the while you could see the gears turning in his head. Yup, I’m pretty sure Terry Tussey’s going to be getting another phone call.